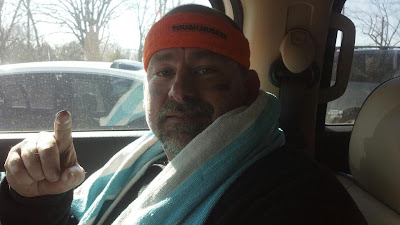 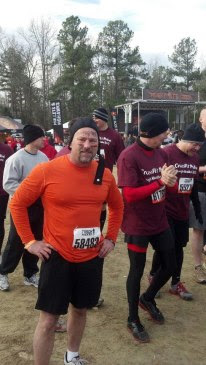 I mentioned before I will be introducing some incredibly inspirational individuals each month and this time I wanted to talk about a person I admire because I witness his fighting spirit and drive to survive and not give up first hand. I see him following chemo therapy treatments, continue to train and persevere. Craig Mullis is a young man I came to know simply by seeing him daily at the gym. I never knew he was suffering with colon cancer, I did notice he was a bald guy, but I never took much time to put much thought into that. I finally overheard some of the people who work in the gym talking about his issues. Although he would be absent for a few weeks he would always come right back after his therapy and train more. I even competed in of all things, a Warrior Dash event the first of this year with him. Craig has always shown such a humble demeanor and doesn’t let on to anyone he is suffering in any way. I have the most respect for him for not being an individual who would just accepts that he is sick. He shows every effort of determination and will power that I believe we all have deep down and should practice on a daily basis.

Recently I lost a family friend to pancreatic cancer. I had to witness his struggle for many years to survive. He lived in remission from this for a few years then the cancer metastasized to his lungs and I got word a few days ago that he had passed away. This is heartbreaking to me when I hear someone loses their life to this horrible disease. When I see someone first hand struggling and accomplishing so much through this disease I believe they deserve special recognition for it. This is Craig’s bio:

Craig Mullis started lifting weights and running a couple of races shortly after high school. He would work a second shift job and then hit the weights. In July 2010, at the age of 37, Craig became even more motivated to exercise when he was diagnosed with colon cancer that had already metastasized to the liver. The doctors were not very positive at this point, but Craig was out to prove them wrong with the help of God’s grace. It has been two years and Craig continues to do treatments every two weeks. After every treatment he wears a pump for 46 hours to continue pumping chemo in. He is determined that this is not going to hold him back; therefore he hits the gym as much as he can. There are days that he doesn’t feel like going, but he pushes himself. Since being diagnosed, Craig has ran two Spartan Races, one Tough Mudder, and one 5k. He plans to run another Tough Mudder in December. Craig says he would have never gotten this far without God’s help. The verse he lives by is Philippians 4:13 “I can do all things through Christ who strengthens me.” It has been a “roller coaster ride” but Craig likes to tell people the same thing he often tells himself, especially when he gets down, NEVER EVER GIVE UP!