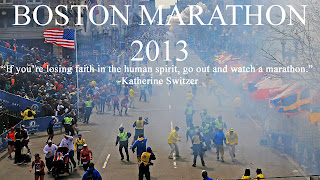 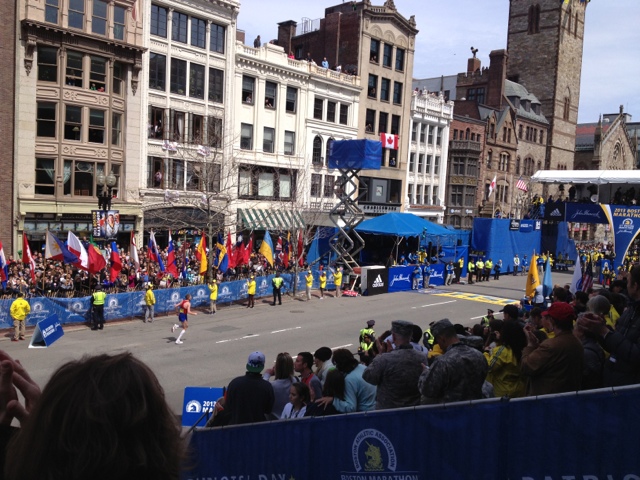 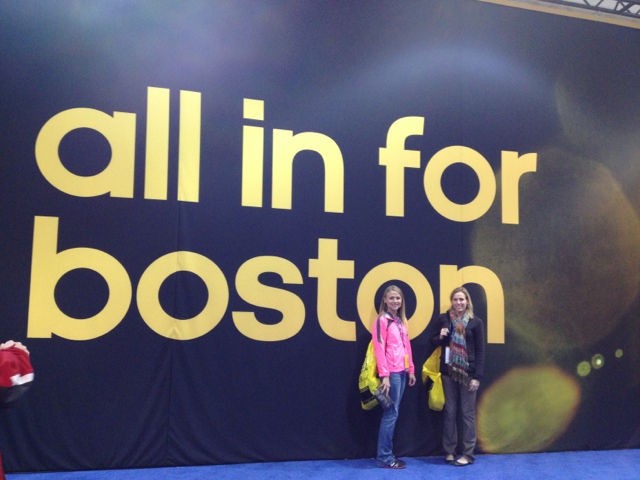 It was an awesome marathon monday in Boston as well as Patriots day. The weather was excellent unlike the race of 2012 when it was unseasonably hot and runners were falling out everywhere. The girls I were with were up and ready to brave the race they had worked so hard for. As I got up my heart pounded with excitement and joy. I was finally in Boston at the race that has been my dream and I had my heart set on for so long. Although I wasn’t going to be running it I would be able to experience what it was all about. I would be witnessing the oldest and most prestigious annual marathon in the world.

I met a friend for coffee and breakfast and we headed out toward the finish line. The elite women had been running at that time and they were expected to come in soon so I wanted to see this and get some photos. We stood, watched and cheered as these unbelievable athletes ran through the all famous Boston Marathon Finish Line. We were standing in the bleachers beside the finish line area and across the street from The Marathon Sports Store for about an hour and a half cheering and snapping pictures of runners that were coming in from the first wave. We decided to move up the road a little to around mile 25.5 and cheer from there some of the later waves that were coming through.

After a while we went a block over to The Prudential Center Food Court for a late lunch. As we both sat there eating pizza and talking we heard a boom. Most of the people in the food court ran to the windows to see what just happened. It sounded as though two cars had just collided. Then 10 seconds later another boom but this one was much louder and I will say is the most harsh sounding thing I’ve ever heard in my lifetime. The whole food court of people stampeded! I witnessed kids screaming running and some even trampled over. I had to jump over a table to make it out to my friend. We immediately ran back to the road we were standing at prior. My mind was frantic at this point, I had no idea the location of any of the girls I were with and my heart pounded because both ladies are mothers to beautiful children. With the next few steps toward the road more people that I knew who were out on that trail came to my mind! Oh my gosh, my running coach whom I love dearly was out there, then my good friend Scott and Mike. I was at a loss for words and all I could do was weep, but I knew I should be strong and help those runners approaching mile 25.5. As runners got closer to us they were not aware of the situation that was happening. We had to push them and direct them in the opposite way of their dream, The Boston Marathon Finish Line.

When all the military, swat team, police, and fire department started taking over things we returned nearby to my friends motel. My mind was still in disbelief and I was at such a loss for words. This was the marathon of all marathons for us runners. The oldest and most prestigious, the one we work our hardest to get to and it should be the happiest time in our lives! We sat in the lobby of that motel for hours and the swat team had the whole place surrounded so we were safe. There were runners with their families and the media and a lot of the spectators. We sat watching a big screen television replay the horrible scenes of what should have been a happy day. I sat there mostly by myself gathering all my thoughts. Thoughts of how I was standing in the location of the place it happened for an hour and a half, thoughts of that Jacksonville Bank Marathon I bonked at around mile 16 and didn’t get my qualifications for Boston this year, but most of the thoughts I had were the expression on the faces of those runners I was pushing away from their 26.2. It was so heartbreaking to me to have to be a part of this. Boston is my dream, it is something I have in my heart to accomplish and it means the world to me so I could relate to the pain on their faces when they heard us saying go the opposite way.

The next morning my flight was to leave at 1:45 p.m. so I had time to wander the streets of Boston and see what it was like after the terror from the day before. Bostlyn street was completely taped off and closed down with military guarding it. The media was everywhere in the park. I snapped some photos and stood in the park watching Lester Holt of The Today Show give an interview. All of the media stations were there doing the same interviews, I gave one or two but did my best to stay away and just witness all of it. At 11:30 I headed back to my motel and got a cab to the airport to finally head home. On the ride to the airport the importance of all of this weekends events became clear to me. We never know what the next second in life will be. My passion has been running and networking running and races for many years. I have a true love for this sport. This experience helped me realize how much I really do love Boston and want to run this race and see that finish line one day. Every runner who has designated their time, energy and then let their determination and passion drive them to a qualification into such a beautiful historical race like Boston I believe deserves the chance to run across that finish line.

This tragedy kept a lot of runners from accomplishing their dream. But us runners are stubborn people I hear so often. This will only make us stronger at heart and drive us to get there next year and we will be running with much more passion and purpose…. 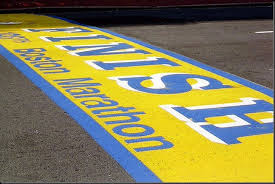 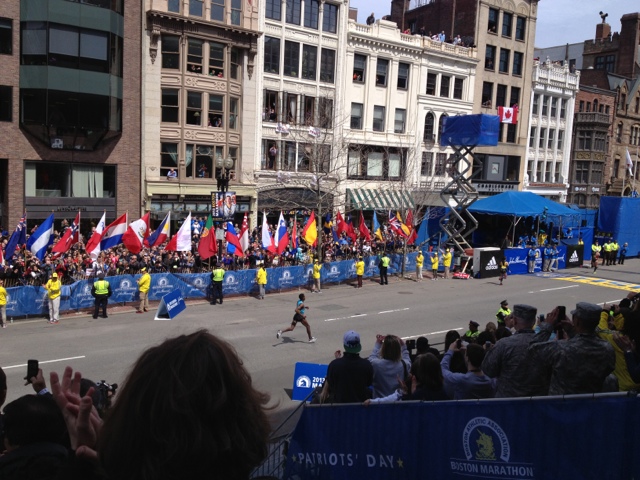 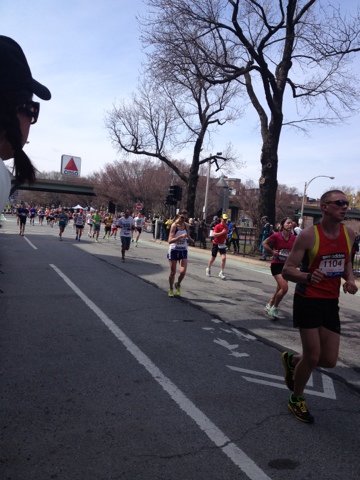 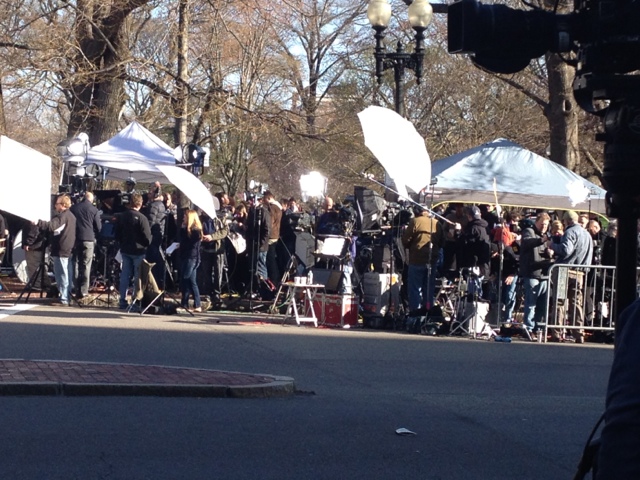 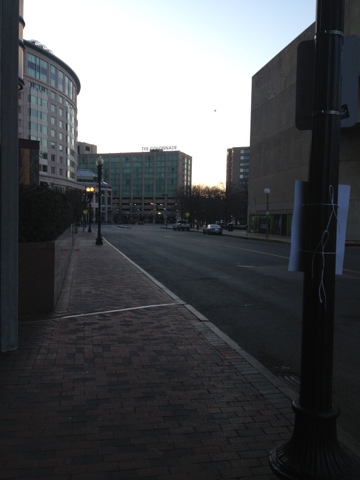 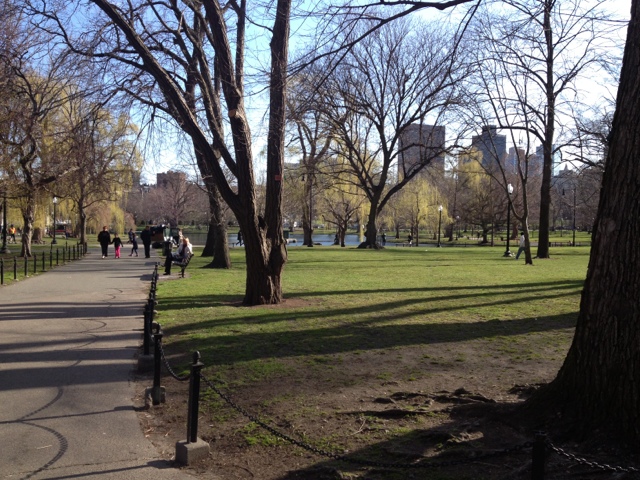 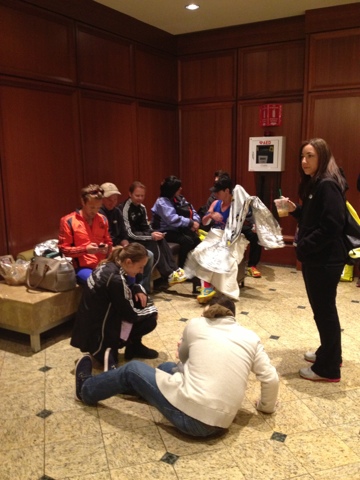 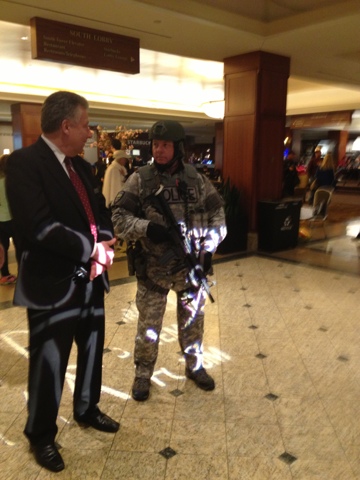