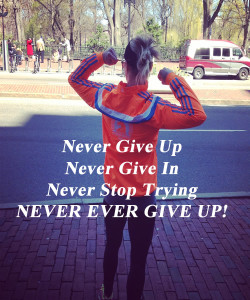 Today is May 1st and it has been a little over a week since I ran Boston.  I didn’t write anything on it directly after my race and I think it was because I was full of so much emotion I didn’t know where to begin and I came home from Boston for one day and hopped back on another plane to San Francisco the very next day . I was asked to be involved in another running documentary and  I have been focusing on this also.   So time, as well as some jet lag has been to blame but I am thankful for this time because it has given me a chance to process my thoughts and put down exactly the feelings I have had up until today… 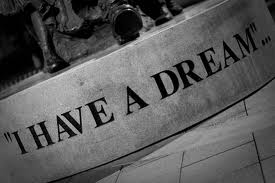 Flying into Boston on Saturday, April 19th my stomach was in knots.  Was this really about to take place, was all my mind could say.   I get to the airport and hop a cab to the hotel I was staying.  I was sponsored through The Scott Rigsby Foundation and they arranged for me to have a room at The W while I was staying there.  I get to the room and set all my bags down and I took a seat on one of the beds in the room. I glanced around and just sat there in disbelief.  I remember looking around that room and saying aloud OH MY GOD THIS IS ACTUALLY GOING TO HAPPEN Stephanie!!!  I thought to myself you have overcome so damn much and you are HERE!

“This is your life… Follow your dreams and never look back.  You do not want to look back one day and wonder “What If”… True, you may fail but you get back up and keep moving… But NEVER EVER GIVE UP!”

I changed my clothes and scooted up the road to Hynes Convention Center to pick up my bib.  Approaching this place it was already a madhouse before I got in.  I paid little attention, and rushed up the stairs to the level to pick up my bib.  I had to stand in line a while to get it and as I was standing there in my mind all I was saying to myself was “Thank You, Thank You, Thank You”.  I get to the number line I was to be located in and I took a look at the lady handing me my bag and I burst into tears and began jumping up and down.  This lady was laughing at me and said hand me your phone sweetie and I will take a picture for you, I said really?  I couldn’t believe she was offering to do this but then she said everyone likes me to do this, so I said whooo hoooo lets shoot it! 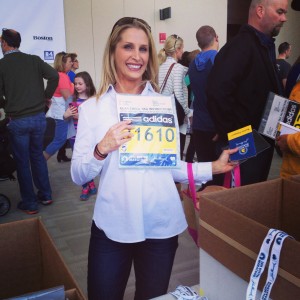 After I got my bib I walked down a level to meet a good friend of mine who was working at the expo.  I stood around and chit chatted with them for a while but then I headed back to the room.  Walking back to that room my mind was still churning over and over Thank You Thank You Thank You… But then the emotions began wailing up in my chest again as I walked by the finish line area.  I saw the store that was blown up last year. I looked up and saw the area I had been sitting which was directly across from that bombing.  I could hardly believe I was standing there again! Those moments from last year were fresh on my mind and I knew automatically the reason I was standing there and all the difficult moments I had been stressing over completely left my mind.  I just KNEW! 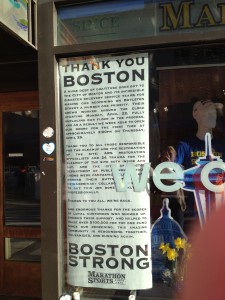 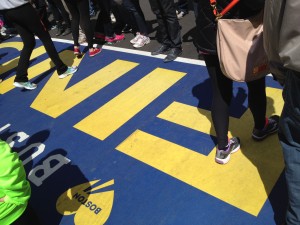 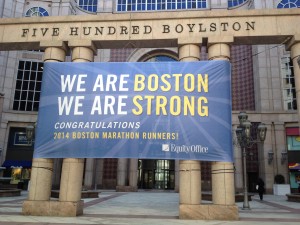 “Life will give you whatever experience is most helpful for the evolution of your consciousness.” 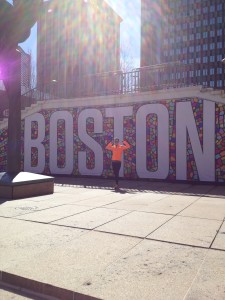 The next day I joined my buddy Scott Rigsby for a convention for The Spaulding Hospital.  This convention was so very powerful.  I sat there and listened to some of the victims from last year speak to us all on what their road to recovery has been like over this year.  As I listened to each one speak I had that immensely intense energy come over me once again.  I knew exactly where most of these victims where coming from when they spoke of the heartache the dealing with that “UNKNOWING”  of what was next in their life.  After the ceremony I wiped up my tears and left then headed down the street back to my hotel but my mind was of course churning with thoughts…

“Sorrow prepares you for joy. It violently sweeps everything out of your house, so that new joy can find space to enter. It shakes the yellow leaves from the bough of your heart, so that fresh green leaves can grow in their place. It pulls up the rotten roots, so that new roots hidden beneath have room to grow. Whatever sorrow shakes from your heart, far better things will take their place.”  ~Rumi

Then it came, Monday April 21st, the day I have been dreaming of for so long.  I woke up in amazement and honestly didn’t know how I should feel.  Should I cry, should I laugh, should I dance and sing, words simply can’t describe what this day has meant to me…I had a close friends stay with me because they were familiar with how to get me to the buses and I completely trusted this friend. He dropped me off and I headed off to get in line.  Waiting in line I met a guy and began chit chatting with him then we got on the bus and sat down.  Everyone on the bus was overjoyed with excitement and I was hooping and hollering with excitement and then I began to carry on a conversation with this guy.  Before he knew anything about me he started talking to me on why this race was so important to him.  Then he said I am a survivor! In that instant my heart sank.  I have spoke of different synchronicities throughout my journey that were all related to my past and I could see so clearly when he said what he did they were still appearing in my life up to the moment I began this amazing race.  I started talking to him and told him my story.  We bonded immediately!  While we were waiting to go to the beginning we danced around and goofed off, and had a blast!

“Do not let your fire go out, spark by irreplaceable spark in the hopeless swaps of the not-quite, the not-yet, and the not-at-all. Do not let the hero in your soul perish in lonely frustration for the life you deserved and have never been able to reach. The world you desire can be won. It exists … it is real … it is possible … it’s yours.” — Ayn Rand 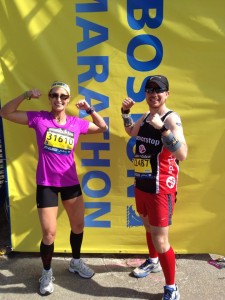 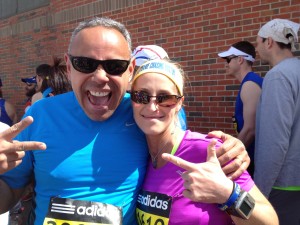 “To affect the quality of the day, that is the highest of arts.”  ~Henry David Thoreau 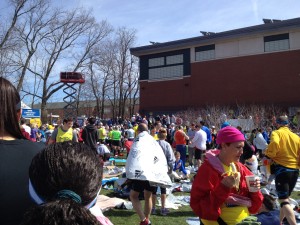 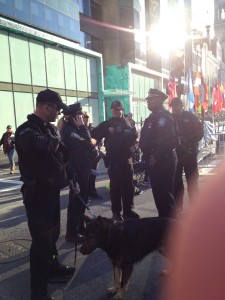 Finally, we were off and running… My heart was filled with gratitude, excitement, and joy at each step I made.  I glanced at the streets and they were lined with fans the whole 26.2 miles.  The energy from the people were more than powerful but AMAZING.  Going into the race I had no intentions of racing it at a fast pace due to an injury I have had with my hip.  I only wanted to embrace every step and run this race for each individual I saw last year and this is exactly what I did.  In fact I have said in the past that if I made it this far I would WALK the bastard to enjoy every single step.  This is how important this race has meant to me over these years. 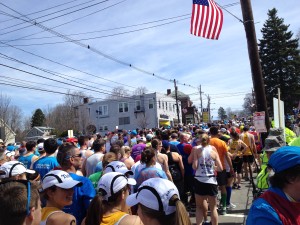 The excitement of seeing people give me a thumbs up and call my name as I ran by was incredible.  I wore my Stephanie Chasing Boston headband and it was exhilarating to hear people acknowledging this message I have worked so hard to get out there. Even though I knew they had no clue of what it meant, it was still awesome.  I can’t say I didn’t do a whole lot of crying this first half.  It was extremely emotional, as if I was in a dream and was going to wake up at any moment.  Then after I hit the half way point the heat came blazing down and I woke up alright…   I was hydrated well and stuck plenty of Gue in my bra to help but that heat was rough stuff… I trudged forward and kept in the back of my mind that I would crawl over that finish line on my elbows if I went down.  I didn’t experience any pain though, I let the energy of the crowd tote me through, and I gave every child I could find a high five as they stuck their hand out to me.

Around mile 22 I began feeling a harsh feeling in my hamstrings.  I have watched movies before that showed runners collapse in a strange way, but I haven’t ever experienced this type of thing, but at that mile I felt my knees going inward.  It was so bizarre to me, but I did not stress one single bit, heck I figured I was at around 4:20 for my time at this rate I would slow it on down even more and clap a few more hands I saw and I did just that, then that feeling was gone… 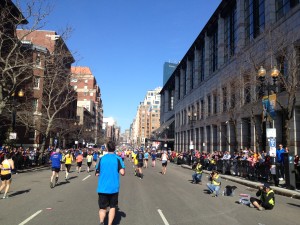 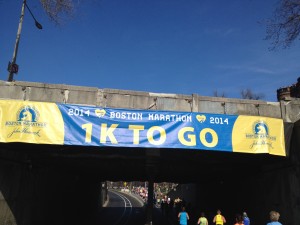 Then my moment came I looked ahead of me and the finish line was in my view.  At that second  I saw many defining moments of my life flash through my mind! The tears began strolling down my face! It was unreal, I was REALLY about to cross this line.  In that instant I saw in my mind that defining moment that got me to this place I was at…. I saw that 14 year old girl sitting in the wheelchair in front of the nurses station in 1993…  Then I saw this same girl being picked up off that hospital floor by all those nurses because she couldn’t walk. I saw those hospital doors which I said I would WALK out of … Then another defining moment happened, I crossed the finish line. This girl that was told she would never walk, never talk, never function again normally had just ran her 6th freakin marathon babyyyyyyy!!!! 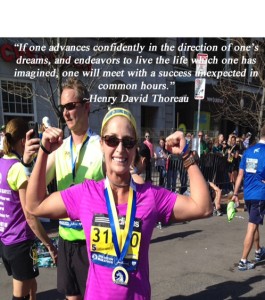 To end my entry I want to say the knowledge I have cultivated along this journey is priceless to me.  This Boston quest  has lead me in so many directions in my life its truly amazing.  But the most important direction it has taken me is straight to my heart and soul. I can now identify this woman that looks back at me each day in the mirror thanks to every thing I experienced through this…  I do not believe this accomplishment has defined me, as much as I feel the overcoming of each obstacle I had to face to get here does.  Every day my life speaks louder to me that I AM A TRUE SURVIVOR, and I will never give up, never give in, never stop trying, I WILL NEVER EVER GIVE UP!!!!!

“You are never given a dream without the power to make it come true.”   ~ Richard Bach