“Real learning comes about when the competitive spirit has ceased.”
― Jiddu Krishnamurti 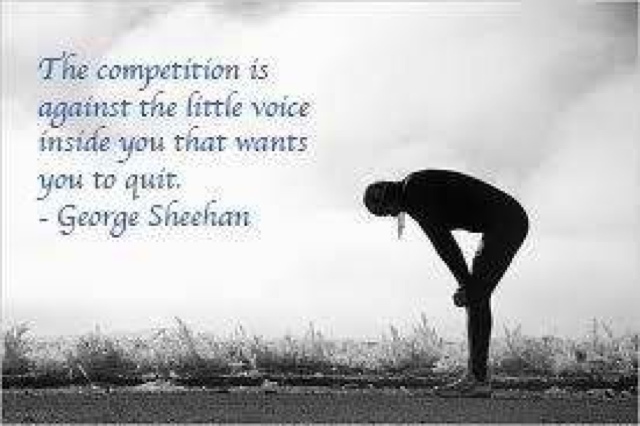 The above quote means a lot to me.. I have been running for over ten years. I went through the years of racing to beat someone down…I had my child in 2006 and decided hey if I can Do this I can dange sure run the marathon I had always dreamed of. I trained and ran my first marathon and when I crossed the finish line I felt investable with no doubts… So now a days I do not train or run for the competition. I do this all for myself and I admire those types of people that maintain that demeanor on running.

This weekend while I was in Michigan I ran a 5k, since I had done so much speedwork already this week I decided against racing it, I wanted to do it to experience the run/race in a different state. As I ran I paid close attention to the different styles of running people used and the shoes worn and most of all the attitude people placed toward the event. It was nice to do a race without the stress of competing to win. I tell a lot of my friends that that whole competing attitude ruins a lot for you sometimes may even break your spirit. My theory on this is I’ve learned to realize there will always be someone faster smarter prettier just basically better at things than I am. Now this lesson didn’t come to me that easy I had to learn of this from my hard knocks i have experienced in life. And initially I did begin running to compete with others but life mellowed me out from that whole attitude and I am so happy I enjoy doing the athletic activities I do without that. Although I do believe a competitive edge is not an aweful quality to have but most importantly to me is it’s how you use it toward the others. Once you’ve reached a level in your running from an amateur to a veteran its no longer about racing its about basic running. It’s all about what’s inside of you!

While I was in Michigan I had the opportunity to do some other training and I quickly found out that the air was so much easier to run in and the area was nice and hilly as well. Like I have mentioned before I live in such a flat area it’s so nice to visit this type of area and I love to run places like this.
Overall it was an enjoyable productive trip for me….