I spoke earlier last month that I would be introducing some inspirational people every few weeks and this blog entry is on an extremely inspiring individual whom I had the opportunity to witness achieve her goals 1st hand… I hear people every day tell me their goals or even ask me to assist them, but this girl set her mind to what she wanted and let no doubt stop her and I admire that so much.

I will begin with the story of how I first met this girl. I worked in a dental office in Fitzgerald GA and she was a very good patient of ours. A nice girl, probably 350lbs or more when I met her and even though she was bigger she always carried a large smile on her face and showed so much pride in herself. A few years later I got another job at a different dental office in Cordele GA, and ran into her again at a gym I am a member of. She told me she was trying to loose weight and was going to begin the crossfit program our gym conducts. I thought the idea was fantastic for her, and I was so impressed that she was actually willing to try that type of training. I get comments from ladies all the time that they are ashamed to come to a gym or when I invite them to join me with my classes they will say they are too ashamed to because of their size or fitness level. When I hear this I always brag on Rebecca Walker. She is so admirable to me and should be to most women that were her size because she didn’t have the 1st care in the world of what anyone thought, she just kept her goals in sight and she achieved everything she set out to do and is still accomplishing so much. Rebecca worked extremely hard and didn’t try to rely on an easy method for anything. I am so proud of her and I think she deserves so much recognition for all the hard work she went through to achieve her goal… 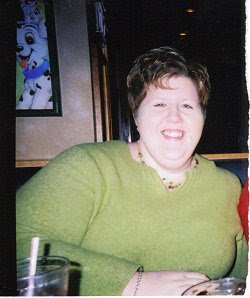 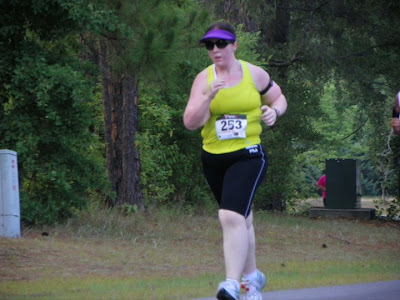 My story pretty much starts like most. I was always overweight as a child, picked on, teased, and such. I was always a happy child and teen though, got along with people, enjoyed my life. I grew up with overweight parents and raised with a mom that cooked all the great southern fried foods but we did have vegetables. After graduating and into college, of course I was stressed with studying, working, and doing clinicals so again I gained more. I tried diets then but nothing stuck. I’ve tried them

all from grapefruit to Atkins to Weight Watchers all throughout the years. In 2002, I moved to Kentucky and for the year and few months I was there, I ballooned up to my highest weight ever, 375 pounds. I also had been diagnosed with obstructive sleep apnea, high blood pressure, PCOS (Polycystic Ovarian Syndrome), and had all the aches and pains that came with being overweight.

In 2004, after I moved back, I wanted to lose weight and we were having a Biggest Loser contest at work so I decided to try a prescription weight loss pill and I lost around 50 pounds and even won 1st in the contest! Of course I wound up putting on about 10 pounds and in 2005 I was ready to lose even more. I joined Weight Watchers again and during the next 8 months I lost around 88 pounds and even had to have gallbladder surgery. I was feeling great and looking it too! The holidays rolled around and there it goes, I stopped Weight Watchers and started putting on weight. I tried again and again on WW the next few years but continued to lose and gain the same weight. During that time I had some routine lab work ordered from my doctor and found out I had underactive thyroid disease, and one of the symptoms is weight gain! I never used that as an excuse though.

In August 2009, my mom and I decided to try it again. We started a gym working out 4-5 days a week and watching what we ate. We both did well but by January 2010, I had put all of it back on. I still had the 40 pounds off from the beginning but that was it, I was still 336 pounds!! I had just turned 31 a few days before New Year’s and made it my resolution to lose weight as a lot of people do but I meant it this time. I wanted to try something new so I started counting calories, still writing down everything I eat, drinking water, eating the right foods, weighing/measuring all my food (all like WW taught), and of course exercising. I was disciplined, determined, and motivated. I didn’t want to be skinny, I wanted to be healthy. My blood pressure was normal by then, my sleep apnea better, but I wanted the rest to be normal, including cholesterol which had went high at one point also! The fact my family history of diabetes, high blood pressure, cancer, and heart disease also factored in.

I changed everything, the way I ate, the amount of exercise, etc and the weight just started falling off. I made a list of goals in all areas from the clothing size I wanted to be in to the weight I wanted to be, on and on. These weren’t resolutions, these were goals and promises to myself. I was amazed at how I started transforming in all ways and I wrote down my weight and loss each week. The more weight I lost, the stronger I got, and the more I wanted to do. I worked out with a personal trainer, tried different classes at the gym, and even began running. I never ever thought I’d be a runner, never had the desire, but I wanted to try. My goals now including 5k’s each month, and then later on a 10k or two. Now I have ran 8-5k’s and 2-10k’s to date. Running is now my passion, working out is my passion, being healthy is my passion. I guess you want to know how much I lost all together. Well from January 2010 to November 2011, I lost 160 pounds more, making a grand total of 200 pounds!!

I went on my first cruise in 2008 and then my second cruise in 2011, and I was amazed at the difference in myself. I had lots more energy, I worked out every single day, I was disciplined in the food I ate and yet still enjoyed it. I even lost 3 pounds while on my second cruise, and I gained 6 on my first one! That will show you right there how determined I was. But you know, this story doesn’t end her. In December I got sick the week before Christmas with a cold and that wasn’t the only thing. I began having bowel issues and I started gaining weight! I thought it was just the holidays and I’d start fresh again in January. I also thought it was my thyroid since my values kept being out of whack and I was having the symptoms of hypothyroidism but my values were hyper. Well one week I’d lose but then I’d gain and gain. This went on and on from December until June. Every effort I made, nothing seemed to work. I noticed digestion problems with eating certain things and yet kept eating them. Finally I went to the doctor in June and being tired and frustrated with what was going on. I had test after test, I researched online, and come to the conclusion I had a gluten intolerance! Plus I had a b12 deficiency which explained why I was so tired when I went running! I read gluten intolerance/celiac disease is related to an autoimmune disorder like thyroid disease, ah ha!. Now I had to change my life again, but that was ok, this is a lifestyle change, not a diet, never was! Your mind has to be set to do it or your body won’t follow. Starting July 30 I went gluten free, stopped drinking all diet sodas, and I’ve lost back 12 pounds and my energy has improved. I can’t wait to see what happens, how much stronger my body can get, how many more races I can run. If I can do this, anyone can, believe me!