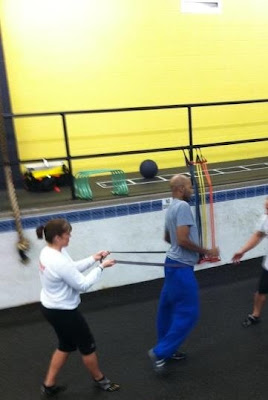 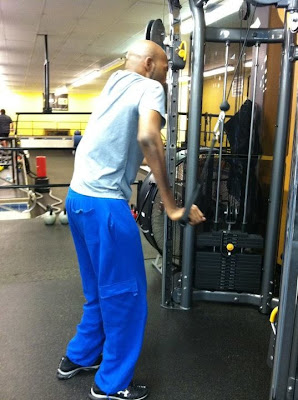 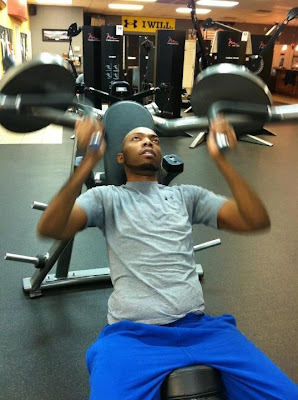 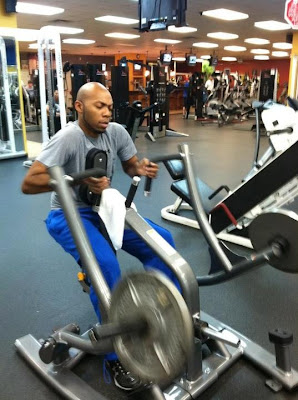 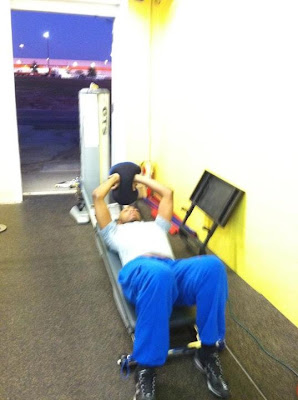 I mentioned before I was going to be recognizing some people I consider to be incredibly inspirational each month. This time I wanted to talk about a person I have known for a very long time. I have so many reasons for admiring this person. He and I have walked very similar paths in life, and every time I look at him I see nothing but a pure miracle and it makes me smile! When James Tolbert and I first met we were the average teenagers in high school. He was an honor student at my high school and I remember him very well because he worked at the local Dairy Queen in town. When you would walk in he would always be the smiling face to greet you. After I graduated like everyone else we all move away, go to college, get married and begin our lives. A few years passed after I got married then I heard James had an accident and was paralyzed. I asked James to submit to me his biography and as I read through it, it gave me chills to read because I see him at the gym working so hard to accomplish his dreams. I respect him with all my heart and admire him for not giving up and continuing to fight for what he wants and believes in….

My name is James C. Tolbert, a native of a small country town in the middle of nowhere. Nearly 12 years ago while in college my life took a devastating turn. On January 7, 2001 I was wrestling (horse-playing) and fell the wrong way and fractured my neck and instantly became a quadriplegic. Within three days of my injury I had to have emergency surgery to replace my cervical bone in hopes not to lose anymore of my functions that I already had. While staying in ICU in Macon Medical Center for a week, neurologists and other doctors ran a number of tests on me and diagnosed me as C-5, C-6, C-7 quadriplegic with little hope of ever walking again and loss of all body function from chest down. To get a better understanding of my injury, mind you the late Christopher Reeves (Super-Man) had an injury level of a C-1 & C-2 and was wheelchair bound, but fortunately for me my spinal cord was not severed.

After being taken out of ICU and having my breathing and feeding tube removed the doctors kept me a few more days to assure the surgery went well before they released me. I vaguely remember the doctors recommending I be transferred to rehab to Shepherd Spinal Center to immediately begin intense rehab to prepare me to deal with my new life before I returned home to the care of my family. Upon arrival to Atlanta Spinal Center I was once again poked, probed, and given a mental evaluation to confirm my diagnosis. I will never forget the physicians coming in my room with a tape recorder and as my mother stood and began telling me I will be in a wheelchair with little hope of ever walking again. As the doctors were doing their job my mind went in a dream state which left me in a confused state as though my mental mind would not let me soak in what I was hearing. After recording what they said they left me a copy of the tape on my bed and walked out like they were ghost that was visiting, when the door closed I turned to my mom and asked her what does that mean and she said to I don’t know but we are going to pray about it and give it over to God!

The board of the Spinal Center suggested I stay at the Spinal Center for 3 to 4 months depending on my progress which quickly I had high expectation of walking out of the center. Over the period of going through rehab I had my moments of accomplishments from getting my halo removed off my head, which I admit I was getting tired of being called Frankenstein..lol . I had my up days as well as my down days. Sometimes reality would try to settle in and would sometimes win with me realizing that I could not feel my legs at all and needing assistance with everything I need or needed to live through the day. During those months my only freedom was my power wheelchair which I was bounded sometimes 14 hours a day, I would often be in my PT class and excuse myself and have to roll off and hide to have a crying session avoiding nurses and my mom because I know if she seen me cry she would cry as well because I felt so helpless in the world. Despite it all after my mental release sessions I would stop crying and say ok get it together Lord give me strength and I would put a smile on my face and roll back out to my PT session and my therapist would say you feel better then lets finish this.

Upon approaching my fourth month of rehab my expectation of walking out of the center wasn’t looking so great because within those months I regained the majority of my internal body functions, some skin sensations, and able to move one toe. Don’t get me wrong, I was grateful for what I had regained because it was more than what I seen others regain because at least I didn’t have to cauterized myself anymore, but I desperately wanted to walk out of that facility and not roll out in a wheelchair. By the end of that final month I was approached in my room by the seating clinic and said it was time to pick out and get fitted for my wheelchair because I was soon to be released. I tried to put a smile on my face as though I was excited but inside it felt like I was being rolled to the basement to be fitted for my funeral casket. With mixed emotions again I was hurt to be leaving the facility in that state but forever grateful that I wasn’t being sent home in the hospital bed I had arrived in nor the power chair I was once confined to.

The saying that home is where the heart is, very true indeed and it promotes healing as well! After being home for a few months miraculous things started happening in a domino effect style physically. Even though I was healing in my body, I sometimes considered it weird because I didn’t understand. Because my toe started having shall I say some company joining in such as my leg, my driving leg at that which gave me a brighter look into the future. With my new found movement my mom quickly searched out a nearby physical therapy rehab that started a new journey for me on an upper level. There I was forced to attempt to stand to keep weight in my legs as much as possible to maintain muscle tone in addition to stretch exercises and range of motion. One particular day of doing my physical therapy… to be precise it was June 6, 2001, my therapist asked me to try to do something different that day while standing at the parallel bars, he told me to walk forward. Of course I turned to him and looked at him like he was crazy and said “what do you mean walk man I’m a quadriplegic.” He explained to me the logic point of trying it because my brain signals are not on accord with my spinal cord, either way how he put it made much sense. So being a risk taker I looked back at him and said ok I will try but I don’t know how to walk, I mean I know it’s left right and right left steps but I could not grasp how a person walks, it was like someone gave me an lobotomy in my brain and I could not feel or see how it’s done. He told me to concentrate so I did and I looked at my right leg and I said “MOVE’’… so to my surprise my right leg moved nearly six inches! I lifted my head up and stared back at my therapist and said ok now move your left leg, I looked back down and it moved also, the whole building was in silence besides my mother giving out squeal sounds carefully not to scream like a banchie…lol. As for myself I didn’t cry I only said I need my wheelchair to sit down so I can take all this in; as soon as I flopped back in my wheelchair all I could feel like a chain had been broke and I felt freer and I said Thank God, finally!

Over time that moment left me with a seed planted inside of me that I knew that would grow and carry on in my journey. Later that year I built enough courage to enroll back into college to finish what I started and to walk across that stage to graduate when that time comes and that time did come May 2003 and again in 2008 for my MPH and I walked across that stage both times. With so much love and support given to me by my family and friends I felt like I could do anything and God personally had them as my angels dispersed around me and everywhere I went. I kind of felt like a celebrity with an entourage many times. Being thankful of that I felt the need to gain as much independence as possible and I had a plan and my plan was to face my fears and strengthen myself mentally and physically as much as possible. I knew I had outgrown physical therapy because they taught me everything I needed to do but I wanted more so I joined a gym so I can be pushed and push myself to the next level. I wanted to be a part of something that would not show me any pity and saw the potential goal I could reach toward.

Today I work a full time job, which I love and still I find time to work out for my well-being and health. I’m proud to be where I am today even though I know there is much more ahead to accomplish and conquer. I can honestly say I’m up for it, to continue this journey of life and I am very anxious to see where my road will lead me. All roads and paths aren’t smooth in this life, this I know, and if I get tired I will roll a little until I regain my strength. If I get tired of walking I know I have God, Family, and Friends to walk along with me to assure I will never fall. 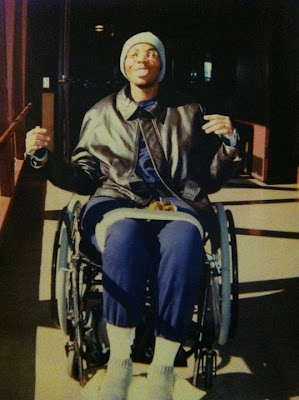